In today’s day and age, sanitation has taken utmost priority for people around. As Indians, it is important for each of us to understand the importance of cleanliness and its good effects on our society. With this in mind, Government had launched Swachh Bharat Mission in 2014 on the birth anniversary of our father of the nation Mahatma Gandhi. India still has a long way to go in this mission however India is inching closer to being called a clean country day by day.

One important factor that helps in keeping any area clean is the underground drainage network. Poor the network, poorer the sanitation around which leads to poorest health conditions. Hence it is mandatory for any municipal corporation, builder, contractors etc., to ensure that the right quality pipes are installed at the right areas so that drainage is efficient. 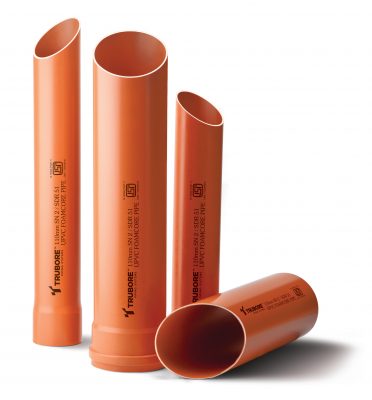 Lets deep dive and talk about one such products which indeed helps in building an efficient underground drainage system which is Trubore Foamcore Piping System. Foamcore pipes are triple layer pipes wherein the outer and inner layer are made of PVC material, whereas the middle layer is made of specially formulated foamed PVC. The outer and inner layer provide load bearing capacity while the middle foam layer gives firmness to the overall pipe structure.

Yes, I know, the above information was a bit technical. However, it is essential for us to understand what the pipes are made of to understand its benefits. We all know as a matter of fact that underground piping systems face a lot of pressure from various things like soil pressure, roots of trees and loads from vehicles on road etc., or other heavier objects which leads to bursting of pipes. Foamcore Pipes because of the PVC material can easily manage this kind of pressure moreover the foam layer in the middle helps in smoothly absorbing the pressure.

Now lets talk about the wall thickness that these pipes come with. As all PVC underground drainage pipes, Foamcore Pipes come in 3 types of wall thickness which are SN2, SN4 and SN8 classes. A user must understand the usage of this thickness as per the area where he is going to install the pipes. Generally thicker pipes are utilised where soil exerts a lot of pressure on the pipe surfaces.

There is a lot more to talk on this and shall cover it in depth in my upcoming blogs, however for now, when you think about building an underground drainage, Think about Trubore Foamcore Piping Systems.